Our aggressive recruitment strategy, intentional candidate search and comprehensive screening process are paramount in qualifying the right candidates for you as a client.

It is our goal to locate individuals who are similar in vision and passion to fit your church and with the appropriate educational background and ministry experience to compliment your pastoral team.

Our 45 years of cumulative ministry experience enables us to clarify your needs and develop a customized search approach.

We are passionate about what we do and rely upon the Holy Spirit’s guidance to present a short list of candidates from which one will ultimately be hired. When we have concluded this process, we have accomplished our partnership with you in advancing the kingdom of God.

Gordon Libby operates in the gifts of encouragement and networking. His greatest joy is seeing godly men and women reach their potential. He wants to see people empowered to be effective in the Kingdom of God and to fully realize their spiritual gifts.  A great deal of his time is spent sharing with men and women who are preparing for their calling and encouraging them to think BIG in their ministry pursuits.

Gordon is originally from northern Maine. He committed his life to Christ at the age of fifteen and soon felt the call of God to ministry. He is a graduate of Zion Bible Institute (now Northpoint Bible College) and holds a bachelor of science degree from Barrington College (merged with Gordon College of Massachusetts in the 1980‘s).

Gordon has been a successful recruiter in executive search and pastoral recruitment for over 30 years. He has served in two major universities in human resources and career services: Brown University, Providence, Rhode Island where he worked in human resources and affirmative action, and the University of Miami, Coral Gables, Florida where he was employed as Assistant Director of Career Planning and Placement.

After working with a few national search firms, Gordon founded what is now Directed Recruiting LLC over fifteen years ago in Miami, Florida. He has served in various churches as a youth ministries director, church consultant, and most of the time in volunteer positions within Assemblies of God, COGIC and independent churches. Over the years he has mentored several men and women into ministry and counts it a great privilege to have had those opportunities.

Exploring what God wants you to do in ministry, give him a call!

Kelvin Belfon is a dynamic leader passionate about helping people clarify their purpose, simplify their lives, and achieve their goals. He has a unique ability to reset an unproductive work dynamic into a positive wholesome atmosphere.

Kelvin is originally from the British Caribbean island of Grenada. After being born to a single parent, he was raised as an orphan under the care of a loving godly woman. At a young age, Kelvin encountered God, cultivating a deep faith and sensitivity to the Holy Spirit.

Kelvin pursued his life calling by earning a BA in Pastoral Ministries from Evangel University (formerly Central Bible College) and a Masters of Divinity from Gordon-Conwell Theological Seminary.

Kelvin has served in a variety of pastor roles impacting hundreds of lives. For example, in 2007, Kelvin grew a struggling group of 35 students to 400 students in four years. In addition to being a youth pastor, Kelvin has excelled leading many types of ministry areas including young adults, young families, first impressions & assimilation, and new believers & membership and a satellite Bible school campus. Additionally, Kelvin has lead short-term missions and humanitarian trips in Colombia, Haiti, the Dominican Republic, Trinidad & Tobago, Canada, Uganda, and most recently, Israel. Kelvin’s wide scoop of experience enables him a unique perspective on how to overcome the challenges of ministry in order to move into success.

Currently, Kelvin oversees the food bank, missions, bereavement, and benevolence ministries of the Potter’s House Church of Denver. He frequently speaks and teaches in churches, schools, conferences, and seminars around the United States. Kelvin also blogs on simplicity and minimalism at Going Uncomplicated.

Kelvin currently resides in Denver, Colorado with his beautiful wife and his four young children. 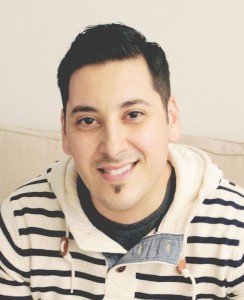 Chris is passionate in his devotion to Jesus Christ. He has the privilege of traveling the world as an evangelist, motivational speaker, and chaplain to over 250,000 youth. Chris has a Bachelor’s Degree in Church Leadership from Bethany College. Interestingly, he was Assistant Chaplain to the Oakland Raiders NFL football team where he engaged players in prayer and discipleship and regularly travelled with the team.

Chris has been helping people connect with God for over fifteen years. His relevant, down-to-earth teaching style has made him a sought after speaker for camps, churches, pro athletes, entertainers and conferences.

After twelve years serving as a youth pastor with one church, Chris presently works as the Area Director for the Fellowship of Christian Athletes in the Dallas/Forth Worth metroplex. He’s the husband to his best friend and wife, Kristina and father of two gorgeous girls, Mayah and Aria. Chris loves sports, movies, popcorn, white cherry slurpees, working out, traveling and spending time with his family.